Ukrainian heavyweight Oleksandr Usyk has drawn on his Cossack heritage as he prepares for his world title clash with towering Briton Anthony Joshua, whose career could face a reckoning on the Red Sea.

Usyk, roared on by millions of war-wracked Ukrainians, is the bookies’ favourite for Saturday’s clash in Jeddah, Saudi Arabia, after he dismantled Joshua to snatch his belts in London last year.

Usyk appeared the more relaxed pre-fight, donning a Cossack costume – complete with a traditional haircut, shaved apart from a single lock – and singing a centuries-old resistance song with gusto from the stage in front of the world’s media.

If any extra motivation were needed, Usyk spent time as a volunteer soldier fighting the Russian invasion before accepting the rematch, which will be screened free-to-air across Ukraine under a special deal.

“We learned from each other in the first fight, but this is a continuation and the first round on Saturday will be round 13,” the 35-year-old said. 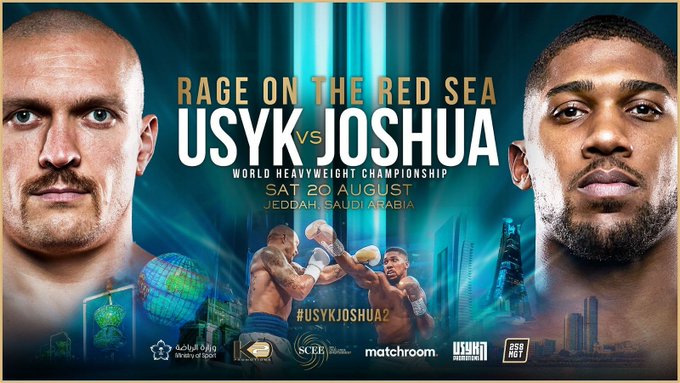 “We had enough time to study each other. We were born to compete for life, for belts, for everything. The one who does not compete, does not win.”

Usyk’s Cossack routine is not the only unconventional part of his build-up, in which he showed off his reflexes by balancing four coins on the back of his hand, throwing them in the air and catching them separately as they dropped.

The gap-toothed southpaw also went on 100-kilometre (60 miles) bike rides in 45 Celsius (113 Fahrenheit) heat, swam for up to five hours and was able to hold his breath underwater for four minutes and 45 seconds, until he almost passed out, his manager Egis Klimas said.

“He looks like a cyborg. He went through hell in the training camp in the last three months,” promoter Alexander Krassyuk said of Usyk, who enjoyed a stellar amateur career and is unbeaten in 19 professional fights.

Krassyuk added: “He made his decision to take the rematch in these circumstances after he had received massive support from his Ukrainian compatriots.

“He was in touch with high-ranking military officers and he visited the hospitals with injured soldiers. In every conversation he heard words of blessing and support to take the rematch. People wanted him to fight.”

Joshua has kept his counsel about his tactics but he is expected to try to impose his physique on Usyk, the shorter man at 6ft 3ins, whose speed and variety flummoxed the Briton last September.

The 32-year-old has dismissed speculation that a defeat would end his career, but admitted he could not afford to slip to a third career loss.

“It’s a must-win fight. Preparations have been tough, but I like the pressure,” said Joshua, adding: “I want to compete. I’m looking forward to it.

“I can’t really say much else, but you’ve got to have a competitive spirit. I’m prepared to do whatever it takes and I’m looking forward to competing this weekend.”

Anthony Joshua said the bout was a ‘a must-win fight’

Read Also: Chelsea already lined up their replacement for Aubameyang

Joshua has tasted revenge before in Saudi Arabia, when he came back from his shock TKO to Mexico’s Andy Ruiz Jr by winning the rematch in Diriyah by unanimous decision in late 2019.

One wildcard is Usyk’s added bulk, after the former world cruiserweight champion gained a reported 15 kilos (33 pounds) in muscle, giving him greater strength and durability but potentially affecting his speed.

“That’s the only thing that I’d be concerned about. I keep in mind that he’s a lot bigger,” Evander Holyfield, a former cruiserweight and heavyweight world champion, told AFP.

“But that’s a decision that he chose to make. Does it help you or not? We’ll see.

“The art of the game is the fastest man and the most skillful boxer is usually the one that wins,” added Holyfield.